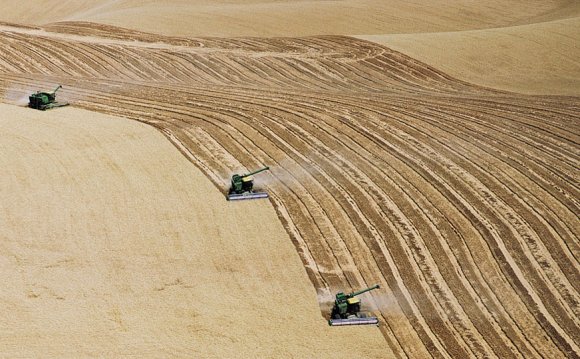 The environmental problems caused by all types of captive animal feeding operations, or CAFO's, is the most documented and indisputable dark side of animal factories. It doesn't matter if it is cattle feed lots, dairy operations, chicken or egg factories, hog breeding and raising or fish farms, they all pollute.

Oceans are so filled with industrial effluents and animal factory waste that it is no longer safe to eat any ocean creature, all are contaminated by excess levels of mercury, cadmium and other trace metals.

The main questions surrounding the environmental problems are:

The last question will be addressed in the next section, CAFO's and health, and the first two examined below.

The way it used to be

Environmental problems from farming weren’t an issue when farms were small, family-owned enterprises. Typically this is characterized as "sustainable" farming.

Sustainable means "natural" and that means the animals are given adequate space for free ranging and allowed to eat whatever the animal evolved to eat such as grass for cattle, insects and seeds for poultry, rooting and foraging for hogs, and insects and smaller fish for larger fish.

A great discussion of what sustainable means can be found at, where else but, Sustainable Table.

It means that animal density is not so large that the pasture cannot absorb and recycle the manure on its own and it means that the farm's layout is such that the animals can be rotated to various pasture areas so as to avoid overgrazing and destruction of grasses cycle of regeneration.

It also means that the natural synergy of farm life is allowed to work. The synergy of a sustainable farm is that grass grows, animals eat the grass and move on and the grass recovers and grows, poultry follows after the herd cleaning up the maggots in the cow pies and other insects attracted by the decomposing manure, thus flies are kept in check. If hogs are on the farm, they can keep forested areas healthy.

The stage is set

The factory production line was adapted to the farm. The McDonald's model of training workers to do one task over and over at minimum wage with little training was brought to the high volume animal farm, which was no longer a farm by any stretch of the imagination, it became an animal factory.

Instead of a variety of life and crops on a single farm, only one animal or crop was raised in long, low row houses of animals or one crop occupying miles and miles of land. It was corn or soybeans for crops and either hogs, chickens, beef cattle or dairy cattle for the animal factories, but never a variety.

This became the modern "monoculture", totally unsustainable and extremely damaging to the environment.

Little or no thought was given to waste management from these huge animal factories. Several thousand hogs in close confinement, or several thousand cows in a feed lot, or tens of thousands of chickens, can churn out an unimaginable amount of urine and manure.

For a short digression, look at the book pictured above. CAFO: The Tragedy of Industrial Animal Factories, is a powerful indictment of modern food production.

It is edited by Daniel Imhoff of Watershedmedia.org fame and he brings together the most respected, knowledgeable experts in sustainable, humane animal husbandry.

The CAFO system is a horrible enterprise for everyone concerned except the corporate owners who profit from the misery but as its contributing authors show, it doesn't have to be this way. Ultimately, CAFO offers a compelling vision for a healthier food system: one that is humane, sound for farmers and communities, and safer for consumers and the environment. Click on the book's cover to look it over or buy it from Amazon.com.

Back to the subject at hand, what happened to all of this foul smelling animal waste? The animal factory answer was to dig 20 or 30 foot deep holes in the ground, each one the size of several football fields, and just pipe the stuff into the hole.

Would you believe they called these enormous open air cesspools "lagoons"? Then when the lagoon got full, they just sprayed it onto nearby fields, to be absorbed by the soil and recycled by plant life, whether natural grasslands or planted crops.