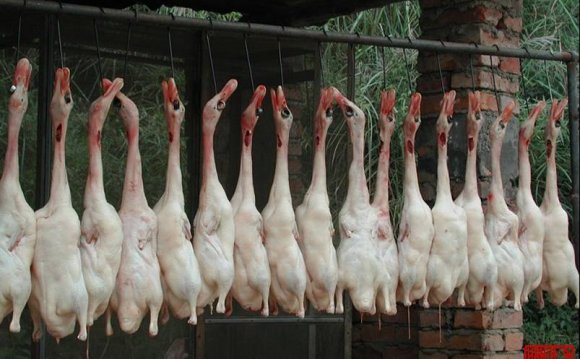 Animals that are raised for food seldom see sunshine, as they are raised in large metal wharehouses or Concentrated Animal Feeding Operations (CAFO's), also known as factory farms. Billions of sentient animal spend their entire lives confined in overcrowded cages, living in their own urine & feces. The horror only gets worse when they are transported to the slaughterhouse, where they are slaughtered in a high speed production-line method as if they are inanimate objects. Animals are often cut, skinned, dismembered, scalded and/or drowned while still alive, as documented by numerous undercover investigations. Birds, who represent more than 85% of the farm animals killed for food are excluded from any animal cruelty laws. The average age for a chicken large enough for slaughter (thanks to growth hormones) is about 6 weeks old.

Animals in the egg & dairy industries are born into a life of anguish, as these industries are inherently cruel. Egg-laying hens are cramped and confined several into a cage the size of a piece of paper and are continually forced to "molt". The female chicks become egg-laying hens like their mothers and are separated from them immediately after birth. The male chicks, however, are a breed that is of no use to the industry, so they are suffocated, crushed or ground up alive as soon as they are hatched. As for the dairy industry, mother cows are kept in a constant state of impregnation (through "rape-racks") and lactation to produce unnaturally large quantites of cows milk. Like the egg industry, female calves are immediately separated from their mothers and go back into the system. Male calves are immediately separated also, but they are sent to live their short lives as veal calves, chained to a wooden crate until they are slaughtered. There is a direct link between the dairy industry and the veal industry.

Fish and other aquatic species are either farmed or caught in the wild by trolling nets, that often sweep up anything in their reach. Many of these aquatics are crushed or suffocate to death, but most fish, sea creatures & aquatic species are slit open and gutted while conscious, or boiled alive.

As an ethical vegan and abolitionist animal rights advocacy organization, we believe that no sentient being should be exploited, tortured, mutilated, force-raped, skinned alive or slaughtered. Veganism is the most ethical, nonviolent way of living and saves billions of lives. It's is better for the planet and your health, too. Many health professionals promote the benefits of a 100% plant-based diet.

"Be a Voice for Billions!"
GO VEGAN

Visit our Resources page for links to more information on the endless terror of factory farms, fish farms, animal transport and slaughterhouses. We also have resources for making the transition to a plant-based, vegan diet. It is important to note that vegans save hundreds of lives each year by not supporting the flesh, egg & dairy industries.