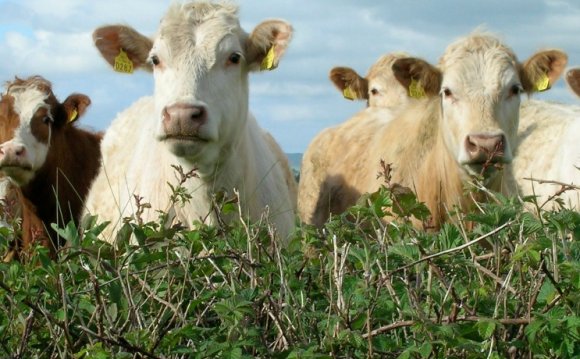 The Scottish Highland Cattle is a hardy breed that thrives in harsh environments. It is frequently used for conservation grazing as it eats plants that many other cattle avoid.

Livestock keepers and policy makers worldwide are increasingly interested in harnessing animal biodiversity to improve production and food security on a warmer, more crowded planet, according to a new FAO report issued today. The agency nonetheless warns that many valuable animal breeds continue to be at risk and calls for stronger efforts to use the pool of genetic resources sustainably.

According to The , some 17 percent (1, 458) of the world's farm animal breeds are currently at risk of extinction, while the risk status of many others (58 percent) is simply unknown due to a lack of data on the size and structure of their populations. Nearly 100 livestock breeds have gone extinct between 2000 and 2014.

Country data shows that indiscriminate cross-breeding is considered as the main cause of genetic erosion. Other common threats to animal genetic diversity are the increasing use of non-native breeds, weak policies and institutions regulating the livestock sector, the decline of traditional livestock production systems, and the neglect of breeds considered not competitive enough.

Both areas are characterized by highly specialized livestock industries that tend to use only a small number of breeds for production.

Genetic diversity provides the raw material for farmers and pastoralists to improve their breeds and adapt livestock populations to changing environments and changing demands.

"For thousands of years, domesticated animals, like sheep, chickens and camels, have contributed directly to the livelihoods and food security of millions of people, " said FAO Director General José Graziano da Silva, "That includes some 70 percent of the world's rural poor today."

"Genetic diversity is a prerequisite for adaptation in the face of future challenges", according to the Director-General, who added that the report will "underpin renewed efforts to ensure that animal genetic resources are used and developed to promote global food security, and remain available for future generations."

Among the future challenges are climate change, emerging diseases, pressure on land and water, and shifting market demands, which make it more important than ever to ensure animal genetic resources are conserved and used sustainably.

Currently, some 38 species and 8, 774 separate breeds of domesticated birds and mammals are used in agriculture and food production.

"The data we've collected suggests there's been improvement in the number of at-risk breeds since the first assessment, " says Beate Scherf, Animal Production Officer at FAO and co-author of the report. "And governments overall have definitely stepped up efforts to halt genetic erosion and more sustainably manage their national livestock breeds."

The study finds that governments are increasingly recognizing the importance of sustainably using and developing the genetic resources embodied in livestock.

When FAO published the first global assessment in 2007, fewer than 10 countries reported having established a gene bank. That number has now risen to 64 countries, and an additional 41 countries are planning to establish such a gene bank, according to the new report.

And these efforts are bearing fruit, experts say: "Over the last decade, countries across Europe have invested heavily in building shared information systems and gene banks as security measures, " according to Scherf.

Regional collaborations like the new European Gene Bank Network (EUGENA) are key to managing and improving breeds in the future, she says, and should be supported by in situ conservation of live animals in their natural habitat.

This comes at a time of expansion in the global trade in breeding animals and livestock semen, often for cross-breeding purposes, with many developing countries emerging as significant importers and some also as exporters of genetic material.

Increasingly, farmers and policy makers in developing countries have embraced imports of genetic material as a way to enhance the productivity of their livestock populations - growing their milk output, for example, or decreasing the time needed for an animal to reach maturity.

But if not well planned, cross-breeding can fail to significantly improve productivity and lead to the loss of valuable characteristics such as the special ability to cope with extremes of temperature, limited water supplies, poor-quality feed, rough terrain, high altitudes and other challenging aspects of the production environment.