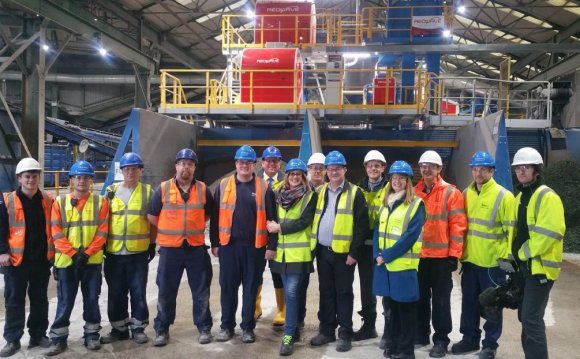 Viridor has officially opened its new ‘ultra-efficient’ headquarters in Taunton. The opening of Viridor House at the £270 million Firepool development sees the company cement its presence in Somerset.

In keeping with the transformation of the business in recent years, Viridor has moved into the ultra-efficient, paper-light offices, which are accredited as ‘excellent’ under the BREEAM sustainable buildings standard. Viridor was the first commercial occupier to sign up to be located at the Firepool site, a major commercial development and an important part of Project Taunton, one of the largest town centre projects currently underway in the South West. Around 110 employees are now based at Viridor House; having moved from the Grade II listed Great Western House on Station Approach, which had been Viridor’s home for the previous 29 years.

Part of Pennon Group Plc and employing over 3, 000 people UK-wide, Viridor is one of the UK’s leading recycling, renewable energy and waste management companies. It has undergone a number of major changes since its origin in 1956 and has developed into one of the leaders in its industry. The company has confirmed its commitment to Taunton as a good place to base a business as it continues its development from a traditional waste management company to one which sees waste as a resource to be utilised through recycling and energy recovery.

At an event to mark the opening, the Mayor of Taunton Deane, Councillor Terry Hall joined Pennon Group Chairman Ken Harvey, Viridor’s Chief Executive Colin Drummond, and other invited guests to tour the building and officially declare the offices open.

Colin Drummond said; “The opening of Viridor’s new headquarters is an important milestone in our company’s development. In order for us to continue to offer the best recycling and waste services to our customers and transform the way we do business, we are continuing to invest in vital infrastructure. Viridor House now provides a fantastic model of how a modern support hub for an organisation like Viridor should operate.”

The Mayor of Taunton Deane, Cllr Terry Hall added; “Viridor House is the first building to open on the Firepool Development which makes it an important part of the continued development of Taunton. As a service provider to many local businesses and an employer to hundreds of people across the region, Viridor also plays an important part in the future of our county town and as such I wish them every success with their new offices.”

Firepool is the first phase of Project Taunton, a 123 acre regeneration scheme. St. Modwen, Taunton Deane Borough Council’s development partner for the £270 million scheme, started construction in 2011, with redevelopment taking place on a phased basis, Firepool will ultimately provide around 500, 000 sq ft of office space and more than 400 apartments and town houses fully supported by retail and leisure facilities including cafes, bars and a hotel.

Pete Davies, Development Manager for St. Modwen, said: “The official opening of Viridor House as the first office building at Firepool is significant for the scheme, Taunton and Somerset as a whole. The unrivalled views over the River Tone and the high quality buildings, along with improvements to road infrastructure and the proposed redevelopment of Taunton Railway Station, ensure that Firepool is a strategic location from which to do business in the South West.”

The move to the new head office has been something that all of Viridor’s employees have been encouraged to get involved in. The winning suggestions in a competition to name the offices’ meeting rooms was won by two employees with rooms being named after key features in the Somerset landscape, including Exmoor, Sedgemoor, Mendip and Blackdown.